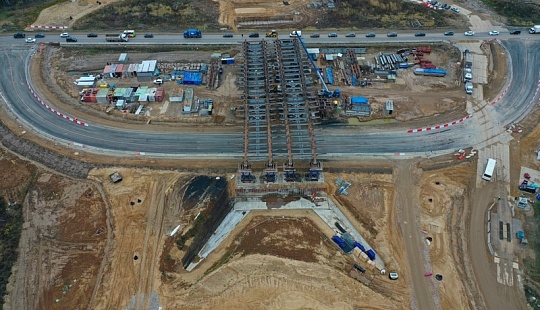 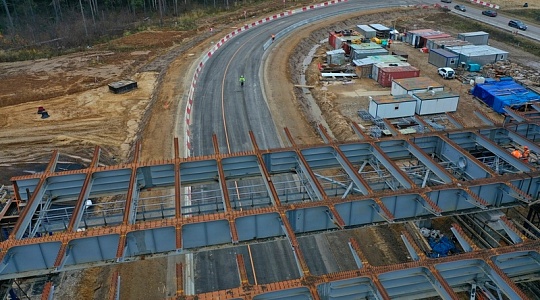 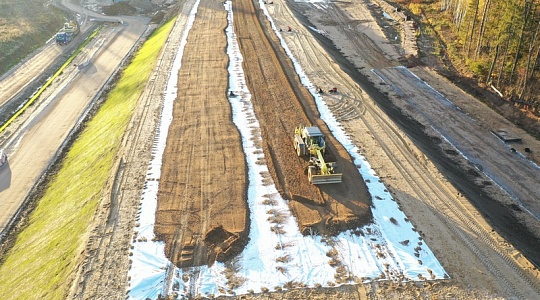 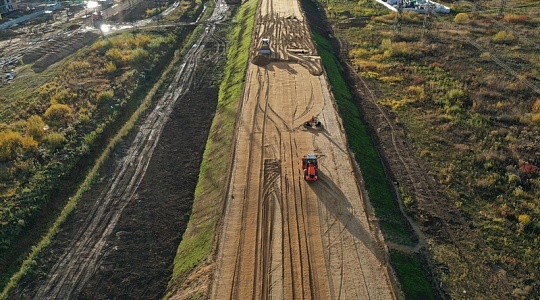 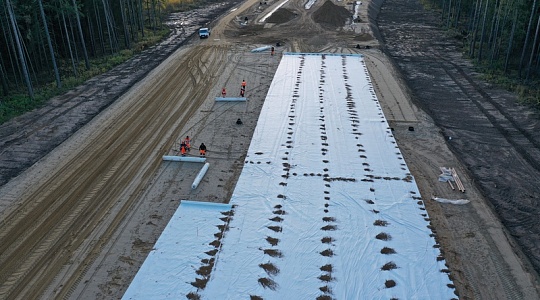 VIS Group is completing the construction of a ring detour around the intersection of the Mytishchi Expressway and Pirogovskoye Highway near the Vysokovo village. This is a requirement for the convenience and safety of motorists during the installation of one of the overpass supports of the future concession route. Span construction is currently underway, with metal structures weighing over 350 tons now installed on temporary supports. Asphalt concrete pavement has been laid on a 300-meter stretch, and road markings are being applied. The change in the traffic pattern is planned next week after the temporary road is commissioned by the traffic police.

In total, the concession project provides for the construction of 11 bridges and overpasses, as well as 6 transport interchanges. Today, work has been launched along almost the entire length of the highway under construction. The overall readiness of the subgrade is 60%, over 2 million cubic meters of soil and about 30,000 cubic meters of crushed stone and sand mixture have been laid in the road base. Builders are erecting several more artificial structures, including a bridge over the Chanka River and an overpass at one of the traffic intersections near the Mebelnaya Fabrika village. In total, VIS Group employs over 320 builders and specialists.

The Mytishchi High-Speed Chord is a 16.1 km-long highway that will connect the Yaroslavskoe and Dmitrovskoe highways, acting as an alternate section of the Moscow Ring Road at a distance of 4-8 km from it. The new route will significantly improve transport accessibility for the residents of the Moscow region and will reduce travel time to Moscow to 1 hour. VIS Group is the investor and concessionaire of the large-scale project, Gazprombank is the financial partner. The share of private investment in the construction phase is about 80%. The Group implements the project throughout its entire life cycle: from the design and organization of financing to the construction and subsequent commercial operation of the highway until 2032.

63 units of special equipment, including truck cranes, drilling rigs, rollers, asphalt pavers, etc. are engaged at the site of one of the largest infrastructure construction projects in the Moscow region. Part of the equipment was relocated by VIS Group from Khabarovsk, where the holding has already commissioned the first expressway in the Russian Far East, the Khabarovsk Bypass. In total, VIS Group’s proprietary fleet of construction equipment includes over 400 units, which allows for the construction of large infrastructure facilities in different regions of Russia.