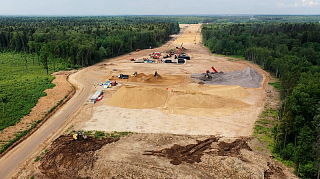 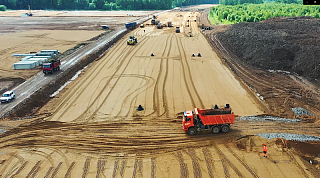 The concession for the creation of the Vinogradovo - Boltino - Tarasovka highway has entered the active construction phase. It will connect the Yaroslavskoye and Dmitrovskoye highways, provide an alternative to the Ostashkovskoye highway and solve the problem of transport support for the Mytishchi urban district. Today, simultaneous roadbed dumping is underway along with reconstruction and construction of new engineering networks and overpasses. Over 100 people and 35 units of special equipment from the construction division of the VIS Group are engaged on the Moscow Region sites.

The concession agreement between the Government of the Moscow Region and the VIS Group was signed on January 30, 2018. This is one of the first road construction projects in Russia being implemented under a private concession initiative. It provides for the organization of financing, design, construction and subsequent operation of the road by the concessionaire. The financial partner of the project is Gazprombank. The total term of the concession is 15 years, after which the road will be donated to the Moscow region.

To date, 122.5 thousand cu. m of soil were used to create the earth bed of the main course of the future 1.3 km road between Pirogovskoye Highway and Traffic Interchange No.3. In parallel with the excavation works, storm sewers, culverts and engineering networks are being installed, including the reconstruction of the AO Mosvodokanal water supply system, and the AO Mosoblenergo rainwater drainage system and cable line. The construction of overpass support pile foundations has begun at the intersection with Pirogovskoye highway and the bridge over the Chanka river. The project provides for the construction of a total of 11 bridges and overpasses, of which 4 are part of four traffic interchanges

The high-speed four-lane road will span 16.1 km. It will run at a distance of 4-8 kilometers from the Moscow Ring Road, acting as a backup and keeping local roads as alternative. Anticipated traffic is between 24,000 to 39,000 vehicles per day. The implementation of the project will reduce the congestion of the Yaroslavskoye, Dmitrovskoye and Ostashkovskoye highways by 30%, and the northern section of the Moscow Ring Road – by 20%. The new highway will significantly improve transport accessibility for over 850,000 residents of the Moscow region.