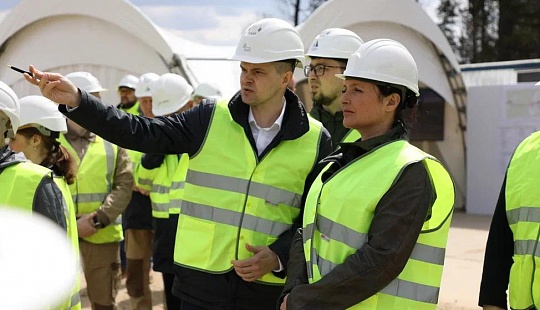 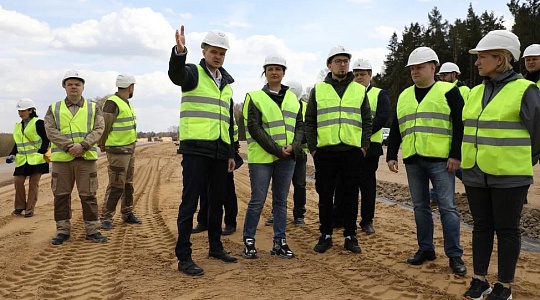 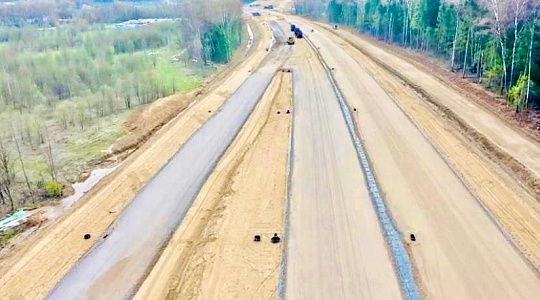 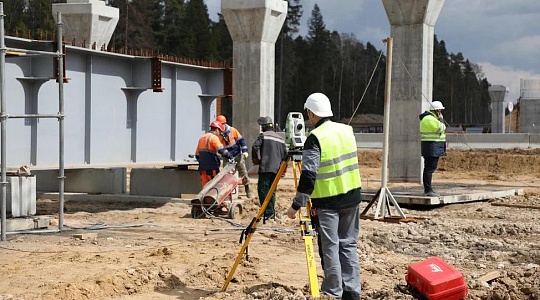 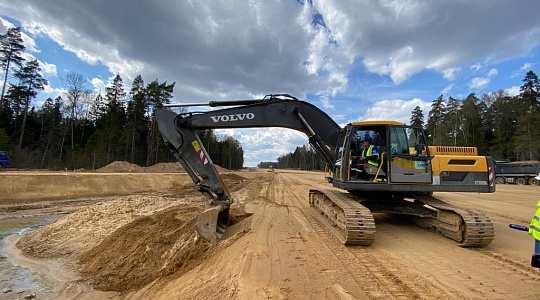 +1
In accordance with the schedule, VIS Group is implementing the investment stage of the concession for the creation of the Vinogradovo-Boltino-Tarasovka highway in the Moscow region. The holding’s construction division is currently working on the installation of subgrade and road pavement, and building an overpass across the Pirogovskoye highway, a bridge over the Chanka River and one of the six transport interchanges.

On May 3, Anna Krotova, Deputy Chairman of the Government of the Moscow Region, representatives of the regional Ministry of Transport and Road Infrastructure, and heads of the Mytishchi and Pushkinsky urban districts visited the highway under construction. They examined the main work areas during the construction site tour. The Executive Director of the Fourth Concession Company (part of VIS Group) Konstantin Gusev and heads of the holding companies engaged in construction discussed the progress of the concession project.

The onset of spring allowed to significantly expand the scope of work, and construction is now ongoing along over 10 kilometers of the route. To date, 1.6 million m3 of soil has been laid at the base of the main passage embankment, and the readiness of the subgrade exceeds 45%. Almost 13,000 m3 of crushed stone have been laid, and the next stage entails the installation of the first pavement layers.

“Construction is being carried out according to schedule and has not been suspended even during the active phases of the pandemic,” said Konstantin Gusev, executive director of the concessionaire company. “Approximately 40 units of road construction equipment and over 350 people are engaged on the site. In connection with the completion of the construction of another large road facility of the VIS Group in Khabarovsk, additional equipment and machines are being transferred to the Moscow region.”

VIS Group acts as a project concessionaire and investor. The route is being built using extrabudgetary funding; the share of private investment at the construction stage is about 80%. Gazprombank is the financial partner. Thanks to the contribution of the private investor, the new transport chord in the region will significantly improve transport accessibility for over 850,000 residents of the Moscow region without placing a major one-time burden on the regional budget.

“The Mytishchi chord is the first road construction concession of the Government of the Moscow Region with partial involvement of investor funds. The construction is under the personal control of Governor Andrey Vorobyov. The new road will run at a distance to the north of the Moscow Ring Road - from Dmitrovskoye to Yaroslavskoye Highway, acting as a backup for one of the busiest sections of the Moscow Ring Road, while maintaining transport links between settlements. Facility construction began in 2020, and is slated for completion in 2024,” said Anna Krotova, Deputy Chairman of the Government of the Moscow Region. “The work is carried out on schedule. Sanctions against Russia do not have a negative impact on the project – the resource base and enterprises of the Moscow region are involved in the construction to the maximum extent. The supply of sand, reinforced concrete products, metal structures, concrete is carried out from Shchelkovo, Dmitrov, Sergiev Posad, Mytishchi, Protvino. Most of the imported materials have already been purchased and delivered to the site. Import substitution options or alternative delivery routes for other materials are being worked out.”

Concessionaire’s stable operation in the complicated macroeconomic situation and under sanction pressure became a separate reason of Anna Krotova’s working visit to the facility. Today, VIS Group is doing significant work to restructure logistics chains, search for alternative suppliers and material manufacturers required by the project.

“We are taking all the necessary measures to ensure the rhythmic financing and supply of the needed resources to the facility. The supporting elements of bridges and overpasses - metal structures produced by a French company, have been purchased and delivered to the site. The project also provides for the use of some of the equipment and structures, such as expansion joints and low-voltage systems, from manufacturers from Germany and Korea. Their import substitution options or alternative delivery routes are being worked out. They will not be required at the facility before 2023, and until that time, all issues related to the supply or replacement of foreign equipment and materials will be resolved,” said Konstantin Gusev, Executive Director of the Fourth Concession Company.

Eleven bridges and overpasses, six road interchanges and five toll booths will be built along the Vinogradovo-Boltino-Tarasovka highway. The high-speed four-lane road will span 16.1 km. The estimated traffic at different stages of operation will be 24.6 to 39,000 vehicles per day. The full concession term is 15 years. After the facility is put into operation, VIS Group will carry out the technical and commercial operation of the motorway.