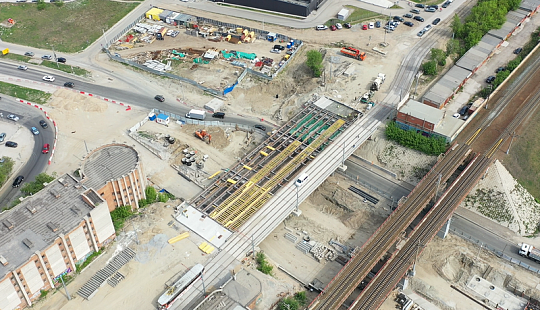 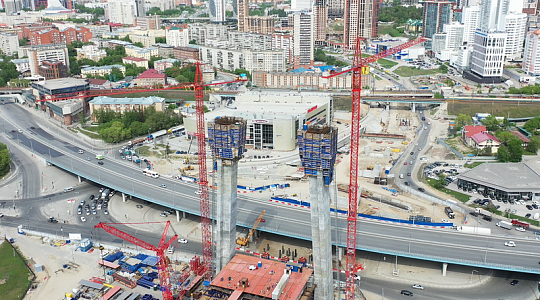 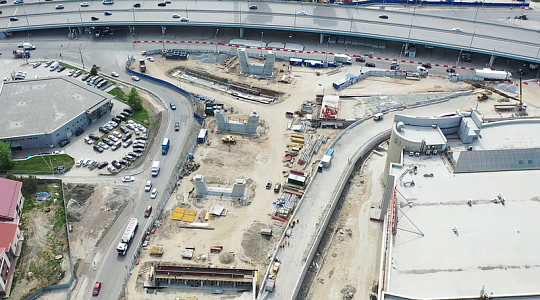 The reconstruction of the Zyryanovsky overpass in Novosibirsk is being carried out as part of the concession to build a bridge across the Ob. Thanks to this project, the overpass, which holds both the motorway and a double-track tram line, will be updated and expanded. The pre-assembly of the metal structures of the automobile track and the concreting of new supports were fully completed as part of the second, and final, phase of work. Construction workers have begun the installation of the reinforced concrete slab of the overpass road superstructure. All work is carried out in accordance with the schedule; the facility’s current overall construction readiness is 60%.

The technical condition of the existing overpass did not meet the modern standards laid down in the concession, requiring its modernization. As part of the first stage of the reconstruction, the tram line was moved and public transport was launched in the normal mode, the old roadway was dismantled, and railway communications were partly remodeled. The length of the overpass is 60 meters, and its width after the completion of the reconstruction will increase from 20 to 28 meters.

VIS Group is the investor and concessionaire of the project to create a bridge across the Ob and the entire adjacent transport infrastructure. Thanks to the concession format and the attraction of funds from a private investor, Novosibirsk will have not only a new bridge crossing, but also a transport interchange system. They will be integrated into the city's street and road network and will allow through high-speed traffic to cross from one bank to another. By 2025 the predicted traffic on the new highway is expected to go up to 60,000 vehicles per day.