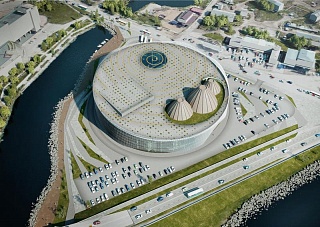 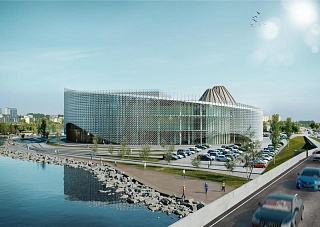 Today the State Expertise Administration of the Republic of Sakha (Yakutia) approved the design documentation for the State Philharmonic and the Arctic Center for Epic Literature and the Arts. A large-scale cultural cluster will appear in the capital of the Republic of Sakha (Yakutia) at the end of 2024. The public-private partnership agreement for the project was signed on September 5, 2019. The VIS Group acts as an investor, designer and developer, and will carry out its technical operation for 7 years following the facility's commissioning.

The project was developed by TPO Reserv, which participated in the design of the Moscow Zaryadye Park, in close cooperation with Yakutia's leading experts in cultural and urban planning and heads of national theaters that will be located in the future complex. As a result of the consultations, wishes regarding the layout and functional purpose of the premises, technical equipment and the composition of the stage equipment were taken into account. This interaction format was previously tested in the VIS Group's other PPP projects and proved to be effective. All the details are elaborated at the design stage to avoid subsequent modifications and to create a facility that fully meets the expectations of its future residents.

The integrated complex of the State Philharmonic and the Arctic Center for Epic Literature and the Arts, which should span almost 33,000 square meters and go up to 36.7 meters high, will be built on the shore of Saisara Lake, comprising a philharmonic, two theaters, and an exhibition and business event space. The auditoriums will offer a total of 1,500 seats: 700 in the Philharmonic, 450 in the Sakha Theater and 350 in the Olonkho Theater. The panoramic stage and the orchestra pit platforms, which can be transformed into a multi-level panoramic stage and turntables with lifting mechanisms allow to create different relief variations. Lighting, multimedia and acoustic equipment will allow to hold events of any level - from classical music concerts to large-scale spectacular performances, large international and republican forums. This will be the first such facility in the republic.

The building was designed with regard to seismological activity and is capable of withstanding a 7.0 earthquake. The sloping accessible roof can be used as an additional recreation space. Major work will be carried out as part of the project to reinforce and improve the shores of the sacred lake for the peoples of Yakutia. These measures, designed in strict accordance with water and environmental legislation, will ensure the protection of the water zone from pollution, siltation and depletion of water. Walking areas, lawns and flower beds, parking for 176 cars will sprawl around the cultural cluster over an area of 18 784 sq. m.

“Ambitious projects like this one not only change the place where they appear, but also affect the mentality of people. This is a project aimed at the future of Yakutia, its spiritual and civilizational development. I am sure that the Arctic Center will become a new point of growth, determine the urban planning prospects of the republican capital, and become a new symbol and point of attraction for those who come to the republic to get acquainted with its rich culture, spiritual heritage and unique nature,” commented a member of the Board of Directors of the Group VIS Sergey Romashov.

Based on the results of the State Expertise, capital expenditures for the construction of the facility were estimated at 11.6 billion rubles. (VAT included). Under the terms of the current PPP agreement, the capital grant from the republican budget is 4.1 billion rubles. The VIS Group will invest 7.5 billion rubles in construction. The cost of the project throughout its entire life cycle was estimated at 18.6 billion rubles in the PPP agreement signed in 2019. This amount includes design, construction and maintenance, and reimbursement of interest on attracted loan financing. According to the current agreement, budget payments to the investor (capital grant, reimbursement of creation and maintenance costs) are distributed over 12 years. Thanks to the public-private partnership mechanism, the republic will be able to implement an ambitious investment project in a short time without a major one-time burden on its budget. After the PPP agreement expires, the building of the State Philharmonic and the Arctic Center for the Epic Literature and the Arts will become the property of the republic.