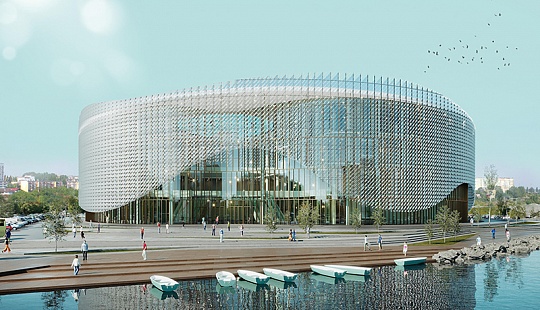 Public partner: Government of the Republic of Sakha (Yakutia)

In 2019, based on the results of the submission of a private initiative to the Government of the Republic of Sakha (Yakutia) and the competitive procedures, Seventeenth Concession Company was chosen as a private partner of the project on the financing, design, creation and maintenance of an integrated building of the State Philharmonic and the Arctic Center for Epic Literature and the Arts in Yakutsk.

A single architectural complex of the State Philharmonic hall and the Arctic center of epic arts will be located on the embankment of the lake Saysary. Due to the level of equipment and improvement the complex will be one of the key factors of socio-cultural development of Yakutia. It will be a new architectural dominant of the capital of the Republic, a point of mass attraction of tourists. For the first time in Yakutia it will be possible to hold musical events of any level: from classical music concerts to international theater productions, shows and conferences.

The project is unique in terms of creating such a large-scale cultural and entertainment facility in permafrost. Severe climatic conditions require compliance with certain requirements for the construction and design of facilities. By the end of 2022 it is planned to put into operation the building of the Philharmonic, while continuing the construction of the Arctic center until the end of 2023. Alternately entering objects, united in one building, is technically and technologically complex construction process.

A separate architectural project is the improvement of the surrounding area. As a result of the project, a modern embankment will appear within the city, where a public space with recreation areas will be organized.