EEF-2019: VIS Group Head takes part in the panel session dedicated to the development of new financial instruments in the Far East 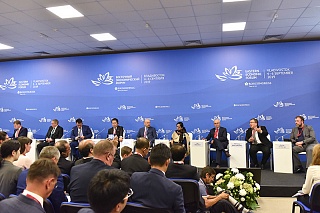 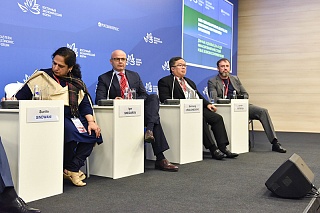 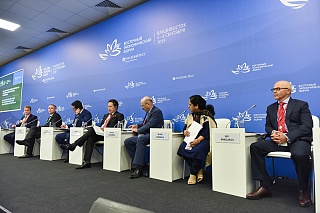 The first day of the Eastern Economic Forum opens with international conferences and expert sessions dedicated to finding new solutions to accelerate the economic growth of the Russian Far East and create a comfortable business environment.

The Chairman of the Board of Directors of VIS Group Igor Snegurov took part in the panel session “Long and Cheap Money for Investment Financing.” The declared topic revealed one of the core themes of EEF-2019, and the event itself aroused great interest among the forum participants. Despite the early hour, representatives of federal ministries, heads of large Russian and foreign companies and infrastructure investors gathered in the meeting room.

The session was moderated by Alexei Chekunkov, CEO of the Far East and the Baikal Region Development Foundation. The event was also attended by the Minister of National Development Planning of Indonesia Bamban Brojonegoro, President and Chairman of the Board of OAO Otkrytie FC Bank Mikhail Zadornov, Member of the Board and COO of OOO SIBUR Sergey Komyshan, Member of the Board of the State Development Corporation VEB.RF Nikolai Tsekhomsky. Representatives of Japanese and Indian financial institutions were also among the speakers.

Session participants discussed projects in the Far Eastern Federal District (FEFD), as well as the possibility of involving Russian and foreign financial institutions in regional infrastructural construction projects. Attracting private investments and establishing optimal conditions for investors should contribute to solving the issues in the development of the Far East.

The discussion moderator noted that today VIS Group is one of the most successful business groups in the Far Eastern Federal District. Igor Snegurov spoke about the holding's activities and noted that the Russian Far East has enormous growth potential. “Its implementation requires overcoming the existing infrastructural restrictions and creating comfortable conditions for Russian and foreign investors, at the legislative level, among others,” said the head of VIS Group.

The holding’s delegation continues its work at the forum. Its agenda for the first day includes a series of meetings with business partners, a speech at the “Private Investment in the Social Sphere” session and participation in presentation events of the Ministry of Transport of the Russian Federation and the Republic of Sakha (Yakutia).