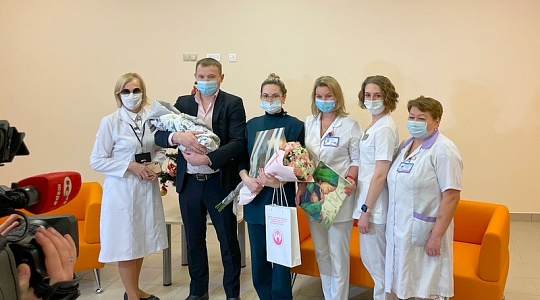 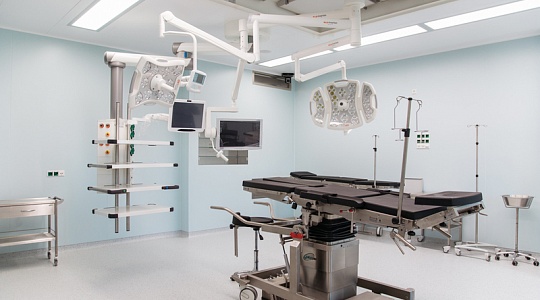 +1
Doctors and staff of the Surgut District Clinical Center for Maternal and Child Health continue to settle into the new high-tech complex. The outpatient department was commissioned on December 15, and recently began to receive outpatients. On December 25, the first baby was born at the Center - a boy named Demid with a weight of 3450 g and a height of 53 cm. His mother Anastasia Samoilova was admitted to the Center from Nizhny Sortym. Today the first discharge ceremony took place; the mother and baby are doing well.

One of the largest perinatal centers in Russia and Europe was built under public-private partnership principles. The project implementation agreement was signed in December 2014. The VIS Group is the investor and private partner, the Health Department of the Khanty-Mansi Autonomous District – Yugra is the public partner. The project’s financial partner is VTB Bank. The permission to commission the facility was obtained in June 2021. In December, the medical facility received all the required licenses and began to function in a new modern complex with an area of 78,000 m3.

“We have completed the investment stage of one of the largest healthcare projects in Russia and have started the technical operation of the center. For VIS Group, the Surgut project is the fourth one implemented under public-private partnership principles, and the largest medical facility. The launch of the center is a landmark event for both the region and all project participants. It has summed up the extensive work of a large number of specialists, builders and the staff of the perinatal center itself,” commented Igor Snegurov, Chairman of the Board of Directors of the VIS Group.

The Center for Maternal and Child Health is designed for 165 visits per day, 10,000 births per year and will be able to simultaneously admit 315 women in labor not only from Yugra, but also from neighboring regions. About 6,000 units of complex medical equipment are installed at the center, including magnetic resonance imaging and computed tomography systems, mammographs, and angiographic systems. Most of the equipment is custom-made by the world's leading manufacturers of medical technology.

“VTB has unique industry expertise and experience in implementing infrastructure projects. The construction of this perinatal center, one of the largest in Russia, is the Bank's first social infrastructure PPP project, an opportunity to contribute to improving quality of life. In addition to its role as a lender under the agreement with a limit of 6.5 billion rubles, VTB acted as a financial advisor to the project. We rendered maximum assistance in the process of approving the terms of concessional financing using state support instruments,” said Yuri Soloviev, First Deputy President and Chairman of VTB Bank.

Over several days, 42 babies have already been born in the new building: 22 boys and 20 girls. All of the center’s departments will be transferred here by the end of 2021. The PPP agreement provides for the VIS Group’s responsibility for the operability of all engineering systems, equipment and building maintenance until 2024.

“Unique opportunities have been created at the center today. We have created a breast care center that utilizes the so-called one-stop rule: when a woman comes in without a diagnosis, we conduct a full range of tests and exams and a breast care consultation, and she leaves with a ready diagnosis and clear management tactics,” said Larisa Belotserkovtseva, chief physician of the Surgut District Clinical Center for Maternal and Child Health.

The new healthcare facility is one of the most modern not only in Yugra, but in the entire country. Unlike a conventional maternity hospital, the center’s capacities will allow to diagnose complicated diseases in mothers and babies in the early stages and treat them using robotics and other cutting-edge medical equipment. The project is fully consistent with the objectives of the Demography National Project. The opening of the new high-tech medical complex was an eagerly-awaited event for the entire region.