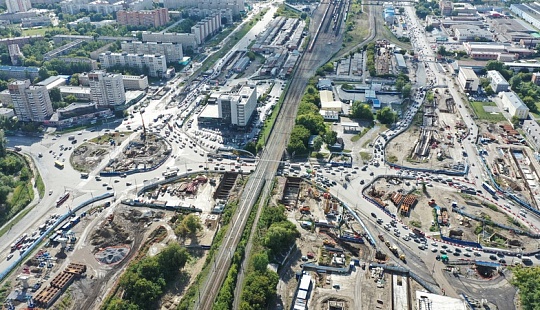 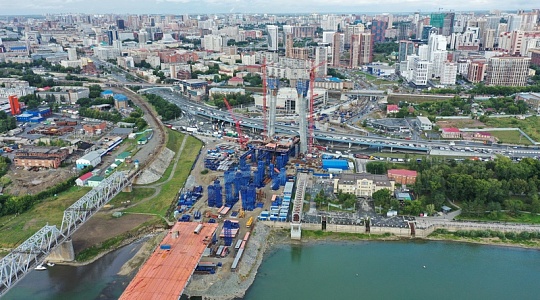 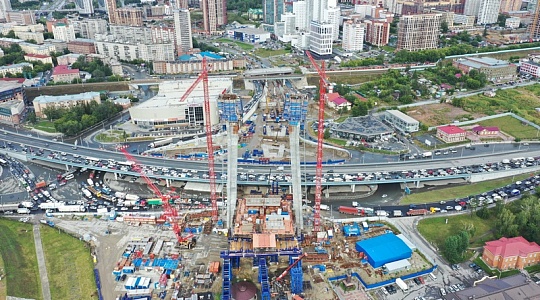 VIS Group is implementing the largest transport concession project in Siberia on schedule; the current construction readiness of the bridge across the Ob River and the adjacent infrastructure exceeds 55%. 1063 people and 158 units of special equipment are engaged in this work.

Large-scale construction of a transport interchange has been launched on the left bank, including the construction of ramps and retaining walls, as well as the removal of utility lines. Works are carried out simultaneously at 6 exists. A total of 10 retaining walls are slated to be built; 4 of them are currently at the stage of 50% completion, and 4 more walls 10-15% ready. Builders have completed the construction of 70 out of 116 pillars of the flyover part of the interchange. Concreting of the monolithic reinforced slab of the flyover roadway is also underway. In September, the installation of metal structures of the span structure of the interchange, which will pass over Truda Square, will begin.

In total, the left-bank transport interchange incorporates 25 exits, 4 elevated pedestrian crossings, 9 steel-reinforced concrete spans. This is the largest engineering structure of its type in Russia. To carry out the work, vehicle movement along existing streets and squares in the construction zone is temporarily limited. The concessionaire is building temporary bypass roads, some of them have already been put into operation around Stantsionaya Street.

As a result of the implementation of the concession project, the traffic pattern on the left bank will be completely altered. The traffic circle on Truda Square will be eliminated, with through multi-level driveways without traffic lights replacing it. It will be possible to get onto the bridge from all adjacent left-bank streets: Stationnaya, Shirokaya, Stanislavsky, Vatutin, Planirovochnaya, Truda Square and Energetikov Drive. Tram traffic will be preserved on the Shirokaya Street with access to Vatutina Street, for which purpose an overpass with a double-track tram line will be built. Pedestrian sidewalks will be built along the road.

On the right bank, the construction of a 114-meter pylon continues. Both of its reinforced concrete posts have already been cast to a height of 84 meters. Preparatory work is underway on the pre- assembly of the upper jumper and lifting to the design height between the racks, forming the first letter of Novosibirsk ("H" in Russian). At the same time, bridge builders are assembling metal structures and installing the cable-stayed section of the bridge. The project provides for 70 cables, which are capable of holding a 30,000-ton load.

The concession project will allow to link two parts of Novosibirsk with a high-speed chord and significantly relieve traffic on the existing bridges and in the city center. The project is being implemented with the involvement of extrabudgetary funds. VIS Group acts as a private investor, with the holding's own investments amounting to over 22%, and the financial partner is Gazprombank. After the bridge is put into operation, the concessionaire will carry out the technical and commercial operation of the created infrastructure for 20 years.