Technical readiness of the bridge concession facilities in Novosibirsk is 65% 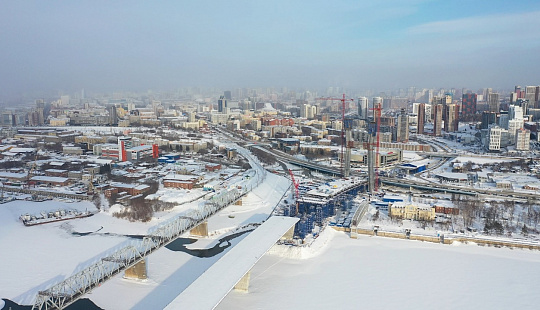 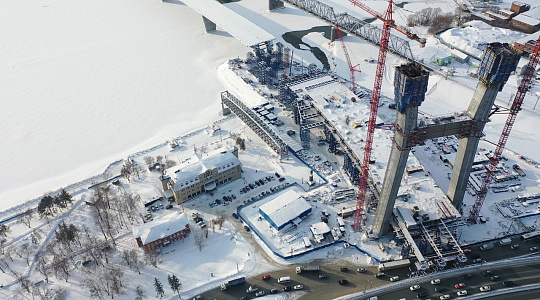 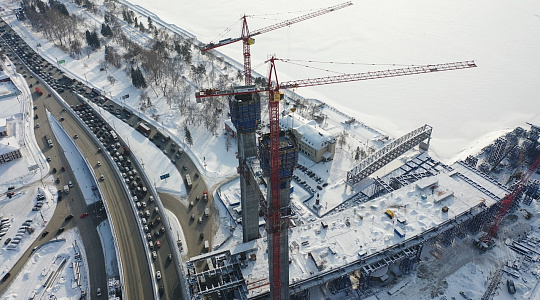 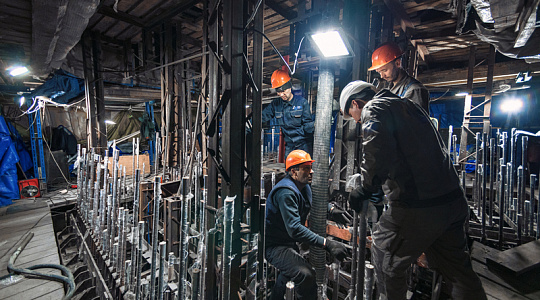 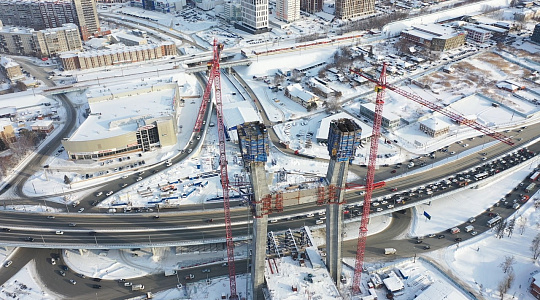 According to current data, the coefficient of technical readiness of the bridge across the Ob River in Novosibirsk is 65%, and for individual infrastructure facilities it exceeds 70-80%. For instance, 21 out of 24 supports were erected on the main passage overpass, and 340 tons of metal structures were extended between the 1st and 7th spans. Another 5,400 tons of metal were installed in the spans between the 6th and the 24th pillars, which comprises 876 out of 1,164 m. Two out of three ramps have been put into operation at the right-bank traffic junction, and normal traffic along them has been launched. Traffic was also launched along the fully reconstructed overpass on Zyryanovskaya street.

To date, work has been launched at all bridge structure facilities and transport interchanges. They employ over 1000 people. The bridge across the Ob in Novosibirsk is a highly complex infrastructure facility, which, in addition to the bridge crossing over the riverbed itself, includes several long overpasses, two large traffic interchanges and two tunnel-type overpasses. Thanks to the concession, a modern high-speed chord is being built in the Siberian capital.

The concreting of the 26th grip of the pylon’s left pillar (104 m) has been completed; work on the right pillar is underway to reinforce the grip at this mark. The 114-meter pylon will hold the cable-stayed section of the bridge. In early November 2022, the installation of the upper cofferdam into the design position was completed. The 220-ton structure was raised in several stages to a height of 67.6 m above ground level and mounted in the design position.

The assembly of the 380-meter cable-stayed section continues on the right bank: temporary supports have been installed, and the corresponding part of the bridge span is being laid on them in stages at a 13-meter height. The work on the installation of the cable-stayed system is slated to begin in March. The project provides for 70 cables, which will take on a load of 30,000 tons.

The left-bank transport interchange includes 25 exits, 4 elevated pedestrian crossings, and 9 steel-reinforced concrete spans. This is the largest engineering structure of this type in Russia. Construction, including the reconstruction of existing utilities, is carried out in the center of an existing urban development. This leads to a dependence of the work progress on the main concession facilities on the completion of work in the area where other urban infrastructure elements are located. Taking into account the large scale of the construction, there is a significant number of related facilities that need to be removed or converted from the development area.

Negative factors that continue to influence the economy in general and the construction industry in particular, have led to the long-term suspension of activity of most suppliers (subcontractors) of building materials and structures. Overall, the events of 2020-2022, including significant fluctuations in currency exchange rates, a sharp increase in the cost of construction resources, breaks in supply chains, have led to the need to revise individual contracts and partnership terms. Despite this, bridge construction is slated to be completed by the end of 2023 in accordance with the terms of the concession agreement, after which VIS Group will carry out the technical and commercial operation of the high-speed chord for 20 years.

Following the implementation of the large-scale project in Novosibirsk, the traffic pattern on the left bank will be completely altered. Circular traffic on Truda Square will be eliminated and replaced with multi-level driveways without traffic lights. It will be possible to enter the bridge from all adjacent left-bank streets: Stationnaya, Shirokaya, Stanislavsky, Vatutina, Planirovochnaya, Truda Square and Energetikov Drive. Tram traffic on the Shirokaya Street with access to Vatutin street will be preserved, for which purpose an overpass with a double-track tram line will be built. Pedestrian sidewalks will appear along the carriageway borders.

The bridge, which received the name of Central Bridge, will connect Yuzhnaya Square with Truda Square and run parallel to the existing railway crossing. It will provide access to the Baikal, Chuisky Trakt and Sibir federal highways. The Siberian Concession Company (part of VIS Group) is the project concessionaire. The company won an open tender held by the Government of the Novosibirsk Region in 2017. The concession’s financial partner is Gazprombank.