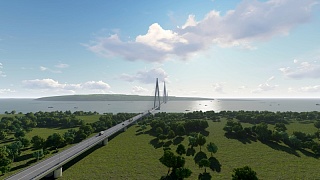 FAU GlavGosExpertise of Russia confirmed the results of the conducted engineering surveys and the compliance of the documentation for the first of the two project stages with the technical regulations requirements, and a positive conclusion was issued. With the allocation of federal co-financing, the preparation work on the construction of a bridge over the Lena River in the Republic of Sakha (Yakutia) can begin in the near future.

The first stage is designed to last 12 months and includes the creation of temporary infrastructure, reconstruction of engineering communications, preparation of technological islands for the construction of supports in the riverbed. A plan is currently in place to mobilize material and technical resources for the construction site in Yakutia and to equip launch camps. The logistics of transporting all the required special equipment has been arranged.

The Lensky Bridge project is divided into preparatory and main stages for a reason. The readiness of stage I documentation will allow to start preparing the construction site in 2021 and accelerate the implementation of this socially significant project.

To date, a consortium of the State Corporation Rostec and the VIS Group has carried out major work on the project. Engineering/geodetic, hydrometeorological, geological and environmental surveys have been completed, and field tests of the bridge structure are underway. The development of design and estimate documentation for the second stage is continuing; and it is expected to be submitted for state examination in the third quarter of 2021. The Giprostroymost Institute - St. Petersburg, which was engaged in the design of the largest transport infrastructure facilities in Russia, such as the Crimean Bridge, the bridge over the Golden Horn Bay in Vladivostok, was selected as the General Designer.

All issues related to attracting off-budget investments have been resolved. The project is fully funded by the concessionaire and financial partner – PAO Sberbank. A 10-year credit line was opened with a limit of up to 25 billion rubles. All works at the research and design stage are financed by the VIS Group.

“The creation of the bridge across the Lena River in Yakutia is a unique project not only for Russia, but also for the world. No one has ever built a facility of this type under permafrost conditions, meanwhile, this bridge crossing has not only been the dream of Yakutia's residents, but was urgently needed to ensure the normal life of an entire region. As a concessionaire, VIS Group is ready to fulfill all of its obligations under the project. Together with the Republic of Sakha (Yakutia) and the federal support, we will be able to start its implementation in the very near future,” said Igor Snegurov, Chairman of the Board of Directors of VIS Group.